New Yorker Vs Church of Scientology !

By Joe Pompeo | The Cutline 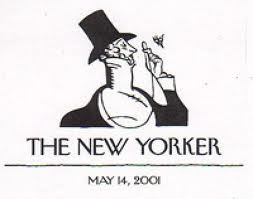 The Church of Scientology has been known to go to great lengths to retaliate against members of the press who produce skeptical reports about its operations.
Case in point: last summer, when the church produced an entire magazine devoted to blasting Anderson Cooper, and then handed the rag out in front of CNN headquarters.
The church’s latest target is the New Yorker, which published a 25,000-word profile by Lawrence Wright of celebrity Scientology defector Paul Haggis back in February. The piece depicted alleged widespread corruption and otherwise bizarre behavior within the institutional hierarchy of the screenwriter’s former religion.
Six months later, Scientologists are now milling about outside the Conde Nast building distributing a 51-page parody issue of their in-house magazine, Freedom, called “The New Yorker: What a Load of Balderdash” as well as a three-part DVD series attacking the venerable weekly.
The New York Times reports: “The church goes to surprising lengths in attempting to discredit The New Yorker and its staff, naming editors, fact-checkers and others who worked on the Scientology article by name . . . . The church mocks The New Yorker as no better than a supermarket tabloid and even created a fake New Yorker cover with the headline ‘Remnick Denies Alien Baby Claim,’ a dig at the magazine’s editor, David Remnick.”
Gawker’s Hamilton Nolan characterized the lavish character assault thusly: “Here they are, six months later, to get their revenge … The level of work, at least, that went into producing this outraged magazine spoof is impressive. The fact that Scientology’s method of choice for refuting a critical story is to criticize as unstable liars sources who were once top Scientology insiders is less impressive.”
A spokeswoman for the New Yorker told The Cutline: “We’re confident in Lawrence Wright’s reporting and our fact-checking process. And we stand by the story we published.”
Indeed, it would seem highly unlikely that any inaccuracies or mischaracterizations would have eluded the New Yorker’s notoriously rigid fact-checking process. As NPR reported when the piece came out, the magazine assigned five fact-checkers to the article, who submitted a whopping 971 queries to the Church ahead of publication. Wright, the research team and New Yorker editor David Remnick likewise met with Scientology spokesman Tommy Davis and four of his attorneys in an eight-hour session before press time.
You can check scans of the anti-New Yorker pub over at Animal NY.posting about Church of Scientology retaliating against The NEw Yorker!
Posted by Live love write at 7:33 AM